Beginners are often so excited to add new fish that they forget about the Aquarium Cycle. The nitrogen cycle is a series of events that break down fish waste into nitrogen, also called new tank syndrome or the start-up cycle. Over several weeks the aquarium begins to form different types of bacteria. New aquarists should purchase a Basic Test Kit to help guide them through their first cycle.

1. Ammonia is introduced into the aquarium through fish waste, live rock or uneaten food. Eventually the waste will begin to break down into harmless ammonium or harmful Ammonia (NH3).

2. Aerobic bacteria begin to form and break Ammonia into Nitrites (NO2). In the saltwater aquarium nitrites aren’t toxic.

3. More bacteria begin to grow and convert harmless Nitrites into Nitrates (NO3). Nitrates are less harmful than Ammonia. 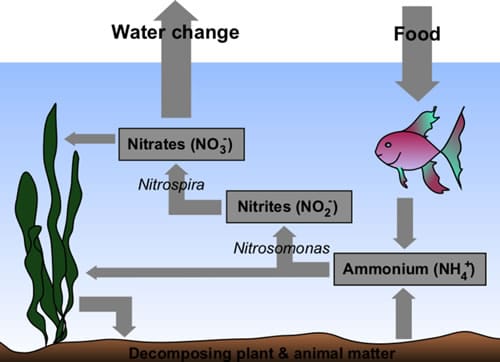 To get the Aquarium Cycle going you may choose to use a small fish, live rock or small portions of food. For most saltwater fish tanks the addition of live rock is the simplest method. Place the live rock in the aquarium and monitor for Ammonia, Nitrite, and Nitrate. Within a few days, you should see a small Ammonia spike even if you have used Cured Live Rock. If you don’t see Ammonia or Nitrites beginning to form in a couple days consider adding a little bit of food. Continue to retest and add food until Ammonia and Nitrites are present. For those more daring, you may add a fish to jump start the cycle.

Over the next few weeks test your water every other day and record your test results. You should see Ammonia peak and then begin to fall. As Ammonia is falling Nitrite should begin to rise and peak. Then Nitrite will fall and Nitrate will begin to build. Finally, Nitrate will peak and then fall. When Ammonia and Nitrite test zero or undetectable and Nitrate is less than 20ppm, your aquarium has cycled and it is now safe to add your first/next fish.

You may also use different Bacteria Starters to help speed up the nitrogen cycle. Using tank water from an established aquarium will have little or no effect in speeding up the cycle as most of the bacteria are located on the live rock and in the Live Sand. Some aquarists advocate doing water changes during the cycle to reduce Ammonia, Nitrite and Nitrate peaks, others recommend being patient and leaving your tank to settle. Some aquariums will cycle as quickly as two weeks; others can take up to two months. However long it takes, be patient and you will be rewarded.