You may have heard about this stuff called Aquarium Live Rock. But what exactly is aquarium live rock and why is it important for your saltwater aquarium?

Live Rock is typically volcano rock taken from the ocean. It comes in many shapes, sizes and typically taken from the Indo-Pacific. Popular collecting sites include Fiji, Tonga, Florida. Now you may be asking yourself, can I use plain red lava rock from the hardware store? This type of aquarium live rock is different than the outdoor lava rock. Technically you could use this rock, but it is not advised because it is full of hard metals that will harm corals and sometimes cause unwanted algae growth.

What Is Saltwater Aquarium Live Rock

What Makes Aquarium Live Rock “Alive”? Live Rock does not actually move or physically grow. It’s not going to get up and walk away. It is the living organisms on the rock that make it alive. The majority of Aquarium Live Rock is covered with bacteria, algae, sea grass, tube worms, shells and other living creatures that are usually beneficial.

Can Dry Live Rock (also called Base Rock) Turn Into Live Rock? Absolutely. You can take dry rock, also known as base rock, and turn it into Live Rock. It will only take a few days for the bacteria to colonize on the rock. You will also need to add some Live Rock to the once dry base Live Rock to start growing different coraline algae, copepods, amphipods and other organisms. So in theory, some Live Rock can be more alive than other Live Rock.

Should I Use Uncured Live Rock? It is best to use this rock when you would like to save money, have plenty of time and a new aquarium. Uncured Live Rock is less expensive than Cured Live Rock. To cure Live Rock you will need an aquarium or watertight container, heater, powerhead and a protein skimmer. If you also have saltwater aquarium lighting on top of the container, it will accelerate the process. Perform fifty percent weekly water changes to and clean the protein skimmer frequently. The stronger the water flow, the faster the rock will cure. Once the water tests free of ammonia, the live rock is considered cured aquarium live rock.

How Much Aquarium Live Rock Do I Need

The rule of thumb is one pound of aquarium live rock per gallon. The heavier the rock, the more you will need to fill the tank. Modern aquariums are using less aquarium live rock because advances in filtration means less reliance on the rock to break down waste. 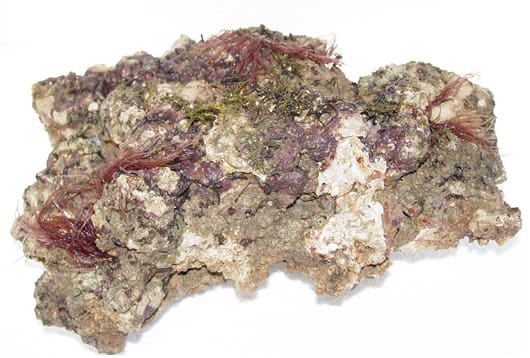 What Type of Aquarium Live Rock Should I Buy? Use a mix of different Aquarium Live Rock. Using larger, denser pieces towards the bottom of structures will provide a strong base. Then add more porous and interestingly shaped pieces for the middle and top. Make sure the rock structure is stable and will not fall over if bumped. Avoid buying pieces that are boulder shaped as they are very dense and are difficult to stack.

Where Can I Buy Aquarium Live Rock? Live Rock can be purchased at many saltwater fish aquarium specialty stores or also online. The advantage of buying in person is your ability to hand select each piece. Although you may find better deals by shopping online. The best is advice for buying aquarium live rock is to compare what your local fish store has in stock compared to what is available on the internet.