One of the most colorful saltwater aquarium fish is surely the Mandarin Goby, also known as the Mandarin Dragonet. Although beautiful in nature, proper care must be taken to keep this fish in your home aquarium.

What Size Tank Do I Need to Keep a Mandarin Goby?

As far as swimming space, a Mandarin Gobies can be kept in an aquarium as small as 20 gallons, but most Mandarin Dragonets require a larger aquarium to sustain their food source. To support one Mandarin, the aquarist should have an established 75 gallon aquarium with live rock and an abundant copepod population. A refugium will also help to grow copepods and is highly recommended, especially for smaller aquariums.

Copepods are microorganisms that live in your aquarium. They eat detritus and are also a food source for your Mandarin Goby. Copepods are very small and will often appear on the live rock and glass after the aquarium lights are turned off. These little creatures reproduce quickly, but a population can be depleted rapidly by a single Mandarin Dragonet.

Where Can I Get Copepods?

Many species of copepods tag along as hitchhikers on live rock and will reproduce in the home aquarium. Bottled Live Copepods are also available from many different vendors. You may introduce live copepods into the aquarium when the lights are off to prevent the other fish from eating them, or you may add them directly into the refugium. 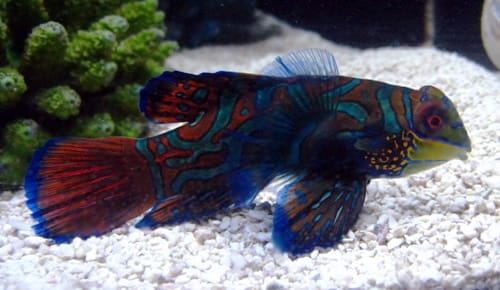 What is a Refugium?

A Refugium is a safe haven for microorganisms to reproduce without being eaten by fish in the display tank. Generally a refugium hangs on the back of an aquarium or is located in the sump. Most refugiums have a deep sand bed around four to eight inches deep with rubble live rock placed in piles where copepods can reproduce. Most hobbyists grow a macroalgae, like Chaetomorpha or Caulerpa in their refugium for added filtration. Most macroalgae require a standard light fixture to grow and thrive.

Will My Mandarin Gobies Eat Other Foods?

Some hobbyists have trained their Mandarins to eat frozen foods; particularly Mysis Shrimp and Cyclop-eeze Although there are many feeding methods, most consist of target feeding the Mandarin with a mixture of live copepods and frozen food. With practice and some luck, the Mandarin may learn that when you approach the aquarium it is time to eat, but don’t assume that all Mandarins will take prepared.

How Can I Tell the Difference Between Male and Female Mandarin Gobies?

Males will typically be larger in size and have a long spiked dorsal fin. Mandarin Dragonets have been known to spawn in captivity.

Can I Mix Different Species of Mandarins Dragonets?

You can’t mix different species of Mandarin Gobies as they will fight. The most common varieties available are the Green, Spotted/Psychedelic and Red. Please remember that Mandarins are slow moving, docile fish and should not be housed with large aggressive fish.