Have you been thinking about purchasing or upgrading to LED Aquarium Lighting? Before LED lights became more intense, they were used only as aquarium moonlights, which allowed your to view your aquarium at night..

LED aquarium lighting is a game changer for the saltwater aquarium hobby. It allows aquarists to keep a wide variety of soft, LPS and SPS corals without having to worry about giving them enough light. Another major advantage is you don’t have the high costs associated with bulb replacement. This is because each LED bulb can last up to 50,000+ hours. Aquarium LED Lighting is also more efficient than traditional lighting because it uses less power, but produces more intense light. As a result, less heat is created which eliminates the need for expensive aquarium chillers, which can cost over $750.00.

If you are trying to determine if LED Aquarium Lighting is worth buying, then consider doing a little bit of math. Cost of LED Aquarium Fixture + Electricity is less than the Cost of Metal Halide/T5 Light Fixture + Replacement Bulbs + Chiller (~$750 if required) + Electricity. In most cases, saltwater aquarists are finding that if you have your reef aquarium for at least three years, it is worth the investment in LED Lights.

Technology is always changing and improving, but there are two types of LED aquarium lighting fixtures currently available. The most common fixtures contain multiple rows of LED strip lights. The image below of the Ecoxotic light fixture contains six rows of LED lights. This LED aquarium lighting fixture is suitable for saltwater aquariums up to 24″ long. So if you have a 75 gallon fish tank, you will need to fixtures. These fixtures mimic linear lighting similar to that of T5. 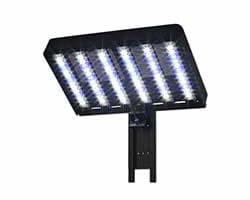 The second aquarium LED lighting fixture looks like a more traditional light bulb, but has several LEDs in a tightly packed spotlight. These LED light bulbs mimic metal halide point source lighting and are sometimes referred to as Japanese spotlights. Both of these LED aquarium lighting fixtures will create a brilliant shimmering effect and will enhance the colors of your corals.

Some aquarium LED lighting fixtures also have the option to create a dimming effect. This allows you to increase and decrease the intensity, which simulates the natural sunrise and sunset. You will also be able to dial in the exact color of the LED bulbs. This means that you won’t have to worry about selecting the right bulbs. Instead, you can adjust it to meet your needs. I hope you have enjoyed learning about LED Aquarium Lighting.

Here is a nice video that shows the comparison between Metal Halide and Ecoxotic LED aquarium lighting. Whenever you are ready purchase or research aquarium LED lighting be sure to visit several online fish supply retailers to compare prices. Sometimes you can find savings of 30-40% even between online dealers on even the most popular LED light fixtures.